Well fuck that fuck this and fuck her. The crazy bitch got our daughter to move back. Said daughter promptly moved out and in with boyfriend shortly after 15th birthday, Said daughter is now pregnant to a little drug fucked eshay, whatever the hell that is. Would not let this woman raise a pup let alone children. She gave our 14 year old daughter drugs and fought with her over those drugs. I'm done.
Posted by B.A.D.NEWSBEAR at 1:25 PM No comments:

If you were in a divorce would you use the same law firm your spouse is using? Would it matter if they used different lawyers from the same firm? I don’t think so. Why then do Traditional owner groups allow law firms to represent them Who are also representing the tribal groups that border their lands. This is a direct conflict of interest but we still let them represent us. They erode our borders and do research and for people trying to delay determination and in doing so make more money off of us and the neighbouring tribes. They get paid for every phone call, meeting and appearance. You cant serve two masters. Neither can you represent two tribes that are in dispute without making one the winner and one the loser. If we have disputes with neighbouring tribes our applicants should be meeting with theirs to discuss and resolve any border disputes that may arise. We are making these law firms rich while they delay proceedings and continue to charge the government on our behalf to drag our determination out. Sack them. There are plenty of alternatives. Sack them. They are laughing at us. All the way to the bank. We need a firm that will make us the priority, that will fight for us instead of having a foot in both camps. Our applicants need to take control and work towards the betterment of us as a nation. If there’s a snake in your bed it will eventually bite you. No matter how friendly it seems. Kabbi Kabbi are claiming past Kilkivan to the outskirts of Goomeri and QSNTS are representing them. How many times must we allow our land to be taken. How many times must we allow Our borders to be changed to suit other tribes and make lawyers rich. Stand together and tell them and the world that we are one Nation and our land is not up for negotiation. Let them know that we won’t be lied to and used to make others rich. We are Wakka Wakka. We stand together we win.
Posted by B.A.D.NEWSBEAR at 9:31 PM No comments:

Here we go folks. For those looking to make a change next year. Labourers Required We have the following position available starting mid-January. We are seeking labourers to commence work in January 2018 on a major construction contract. There are numerous opportunities available but they won’t last. If you can work hard in hot dusty conditions and don’t mind staying at a fully serviced camp contact us at Indigenous Workstars and we’ll see if you’ve got what it takes. Must be able to pass a pre-employment drug and alcohol screen and medical. Requirements are: • White or Blue construction Card • Be able to pass Drug and Alcohol and Pre Medical • Drivers licence or photo ID • Birth Certificate or Passport • Strong Labouring Background The job is in the Collinsville Solar farm to start work in the middle of January. Camp Accommodation provided Roster is 3 weeks on and 1 week off. Rates will be discussed with those who get through pre-screening to the interview stage. DIDO 12 months work. Register on www.workstars.com.au and we can kick start your New Year the right way. Once you've registered call me and let's make a change. TAKE THAT NEXT STEP!! www.workstars.com.au
Posted by B.A.D.NEWSBEAR at 5:15 PM No comments:

Another Australia Day Over

So, I have a lot of positions going at a local meatworks in the south Burnett region (Kingaroy). The main criteria are to be able to pass a drug and alcohol test and have your own reliable transport and license to get to and from work, and be reasonably fit as there is quite a bit of lifting (up to 20 kilos). If you fit the bill there is long term work which pays well and has three different shifts to choose from. We have jobs going on the Slaughter Floor, jobs in packing, jobs in the offal rooms and hygiene positions going. If you would like to apply hit me up and we can get the ball rolling. Not a job that would suit everyone but good pay for those that can handle it. Call me on 0436 009 468 to apply.
Posted by B.A.D.NEWSBEAR at 4:47 PM No comments:

Hey folks, how's things out in the great big world? We've got N.A.I.D.O.C. coming up again this year. How you mob gonna celebrate? There'll be people coming out of the woodworks again this year. A good chance to catch up with mates and rellys you haven't seen for a while.


We have a new range of t shirts out this year. They can be seen below. We are working on a few other items of apparel including shorts and hats. A couple of surprise items should be out later this year too. 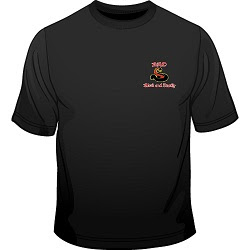 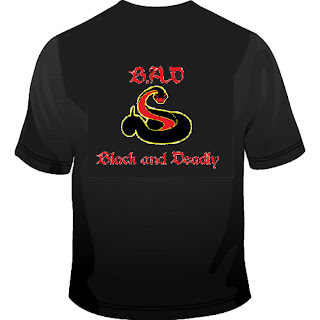 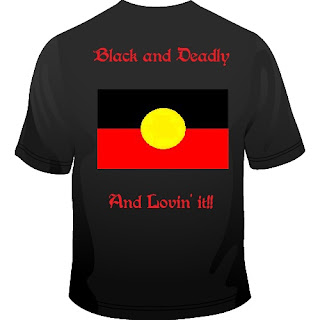 The shirts are $30 each and come in sizes from small through to XXXL. We also have them for toddlers and kids, along with shirts with other printing. If you see something you like give us a yell at blackanddeadly1970@hotmail.com and let us know. We'll get in touch and get it happening.

Anyway, have a good time at N.A.I.D.O.C. and remember, if you're gonna drink do it in moderation and don't become a statistic.
Posted by B.A.D.NEWSBEAR at 10:01 PM No comments:

May Day In the Bush

So, big party out in Barcaldine in May. Might be an idea to get along. Bound to be a good time had out there. I'm told last year's old fella's football game was a sight to see. I hear there were tears of laughter and of pain, laughter from the crowd and pain from the players.

Beautiful little town Barcaldine, full of good, down to earth people. There used to be a Black and White tournament in Barcaldine. Way before there was the Indigenous All Star team. The All Stars from those days had names like "David Thompson", "Henry Anderson" and "Norman (Twinkle Toes) Freeman".

I had the honour of playing in the final year of the Black and Whites myself. 1986. Norman Freeman sr. was 53 years old playing fullback and captain for the All Blacks reserve grade side against the All Whites.

Normie asked before the game "Has anyone seen the rubbing alcohol?"
No-one had, or so we thought. Turns out some fool had drank it and not owned up.

53 years old and still stepping around blokes half his age. Maybe not as lightly as he once did but still with plenty of spirit. Those who remember Normie will remember the cheeky grin, the laughter and the clowning around he got up to. Still one of the best players to come out of CQ.
﻿
﻿
﻿ ﻿

I remember that we lost that game but won the A grade. But the thing was, it didn't matter who won the game. The enjoyment was in getting out there and sticking it to the All Whites while wearing an All Black Jersey. After the games the mateship between the players made you forget all the knocks and bruises from the field. The competition on the field was fierce don't get me wrong, but over a couple of beers all was good again.
﻿
﻿


﻿ ﻿
Those jerseys made us feel invincible. At sixteen years old and about 70 kilos, I was one of the smaller blokes playing that day, but looking over and seeing those black giants standing beside you in the red yellow and black jerseys seemed to make tackling the All Whites that much easier.

These may not be the jerseys we wore, but they still give you that feeling of pride when you wear them. BlacknDeadly, thats how we felt.

These are the first items in our clothing line folks. Just click to order. Don't forget to include your size and how many you want. Show your pride this year and every year. T shirts $35, we will have polo shirts coming soon as well as Hoodies, board shorts and other apparel.
Posted by B.A.D.NEWSBEAR at 5:10 AM No comments: